Upon landing on the Garden Island of Kauai, Hawaii my skin was caressed by the soft breeze of the Pacific Ocean, the aroma of fresh plumeria drifted upwards from my lei, overtaking my sense of smell, and my sight was dotted with the slogan “aloha” against the gorgeous techicolour scenery. Aloha was emblazoned on everything, from road signs, to t-shirts, to jewelry and bags. I knew of Aloha as a greeting and had only heard of the “aloha lifestyle”, an elusive feeling that I believed could only exist in a tropical place, not the frozen netherworld of Canada. Naturally, my first question was, what does Aloha imply? I mean, it’s not like we have epic proportions of merchandise that state “hello” or “goodbye” on them, there had to be more to it.

Having friends who live in Hawaii allowed me to have an inside account of the word Aloha and the expression was defined to me as meaning “the breath of life”. The greeting is officially translated as “may you have everlasting breath”. In traditional Hawaiian culture, people would greet one another in a custom called honi, two people would join their noses together and breathe in the essence of each other. Forget about personal space, it is all about being able to share yourself on an intimate level.

It is said that when Captain Cook and his crew first discovered Hawaii they would reach out their hand to greet the Hawaiian people, from then on foreigners of Caucasian descent in Hawaii would be known as haole, meaning “no breath”. Newcomers were said to lack the essence of life, the aloha, if you will. Although there is much argument about this term these days it does make for an interesting story. And to myself, it really excited my Romero zombie type loving side, metaphorically are we forever linked to the Dawn of the Dead zombies, bumping into each other, as we stumble through our shopping centres purely consuming, and not living?? Perhaps we are.

Not to get too off topic here, but it sparked my undead heart and brains just a little bit, so in writing on Kauai I wanted to focus on a few of the legends and lore, as well as the darker tidbits of the area that I stayed in. A quick google search will help you find the fabulously wild, beautiful spots and noteworthy beaches on the island, but here are a few of the less talked about histories and mythologies for those who enjoy the shadow side of magnificent paradises.

I was staying in the Wailua homesteads area with a longtime friend from Grade 8 and her house was just a short distance from Wailua Beach. There was so much history and spots of interest in this area that I hardly needed to venture anywhere else. Although, we did take short day trips to Hanalei Bay, Shipwreck Beach and I had a wonderful surf lesson at Kalapaki Beach. It should be noted that Kauai is very drivable and many tourist sites are accessible by car and within a couple of hours drive of eachother.  But even if I hadn’t explored outside of the area I believe I would have been able to spend my two weeks getting lost in the lore and legends of the small area surrounding my accomidations.

The most iconic structure in the area of Wailua is the ruins of the Coco Palms, a once decadent hotel that boasted many of the 1950’s and 60’s Hollywood a-listers as guests. The famous Elvis Blue Hawaii wedding scene was filmed on the grounds of the Coco Palms. Here is a picture of the remains of the grounds that I was able to see.

The lavish hotel also became part of the sets Pagan Love Song, Miss Sadie Thompson and Voodoo Island. Check out his picture of Boris Karloff with a mock up of the Voodoo Island set featuring the Coco Palms.

Unfortunately, the hotel was destroyed by Hurricane Iniki in 1992, but there are current plans to rebuild this hotel to its former glory. Check out more about the Coco Palms on the Something Interesting blog, it’s so fascinating.

One would not have to venture far from the Coco Palms resort to realize that the entire area is not only steeped in Hollywood legend, but also Hawaiian lore. The Wailua River is a stone’s throw away from the Coco Palms and is home to one of the islands most infamous gods, the shark god Kuhaimoana, who lives at the mouth of the river. It is said that Kuhaimoana would pose as a human while tending a tarot patch upriver, if anyone passed him he would ask where they were going, if they replied fishing he would wish them luck. Once the people were out of site, he would turn back into shark form, swim down the river, and warn the fish in the area. Talk about marine neighborhood fish watch.

The Wailua area and Wailua beach have many important heiau (sacred sites), these were sites for governance and rituals. I did come across one of these sites, Kukui Heiau, the site was used as a place of spiritual retreat and there are legends of canoe voyages across the pacific to this spot.

What I thought was interesting was this sign asking people not to meditate or sit here. I can’t help but think of our North American tendency to use a space for our own purposes, so instead of taking a few crystals out and sitting in the space for a bit (which was really tempting) I let myself be humbled and refreshed just by the beauty of the spot, and it was worth it.

It is also said that the sands of wailua beach, by Lydgate Park, were used as burial grounds, as with many areas of the island sand burials were common. Kings, queens and higher-ranking individuals were usually given cave burials but others were buried in sand dunes. You may not run across any skulls while lying on the dreamy ocean shores anymore, but you can always check out a more modern cemetery. The Wailua cemetery is just as lush as you might imagine a Hawaiian graveyard to be.  What a gorgeous place to be laid to rest. 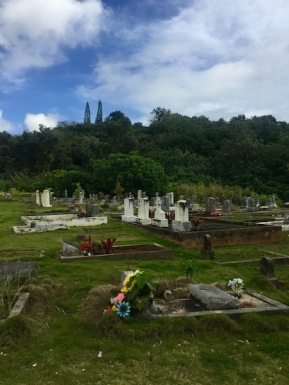 On one of our road trips we stopped at a look out to gaze upon the valleys that line the Menehune fishpond. I had heard rumors of UFO sightings in this area. I didn’t capture anything on my camera but supposedly some people have ended up with pictures of birds perching on an invisible object, hovering over the mountains of this area. While gazing upon the wondrous peaks and valleys we were overwhelmed by a loud rumbling sound that came on quickly, then dissipated. At first I thought this was a helicopter, but my company, a trained helicopter pilot, confirmed that this definitely wasn’t a known flying object.  Hmmmmmm

It wasn’t until returning home that I realized that the Menehune pond was named after the Menehune people, a legendary breed of mischievous little people that are said to roam the forest. The Menehune are between 6 inches and 2 feet tall and only work at night, preferring not be watched. Sometimes they are said to use arrows to pierce the hearts of angry people to make them feel love instead of hate. Perhaps that is why you meet so many happy people on this island, if the beauty, ocean and essence of life don’t make you happy the little people will. Most people will never catch a glimpse of the Menehune, but it is said that they love cliff diving and if you hear splashing at night it could be the them.

This is not the only strange sound you may hear at night in this area! If you hear the sound of chanting or drumming in the middle of one of the nights honouring Hawaiian gods it could be the Nightmarchers.  The nightmarches do not actually march, they float, the stench of rotten flesh and sound of a conch shell blaring could be your first signal of the approaching group. They are the dead, risen from their graves, making their way to one of Kauai’s sacred sites, torches ablaze. If a mortal were to look upon them, they would take this poor soul with them, causing their untimely demise. It is said that you must face the ground, showing proper respect, if you do cross paths with the nightmarchers.

Even though I am one to seek out these unusual occurrences, I do believe I can call myself lucky to have been spared the experience, as I do not trust myself not to look.  You know what they say, curiosity killed the self-proclaimed cat lady.

What I found was the most unusual thing about my tip to Kauai, Hawaii was that this was one of the only trips that I had not planned to be seeking out the paranormal, yet everywhere I went magic unfolded, or I would stumble upon ground where a legend was conceived. It was almost impossible to take a beach vacation here without feeling a magnetic pull of a timeless vortex of sand, sea and lore. And what is life without realizing your own mortality and unique history within the context of human experience and the legend of the land you roam? In that way, I can indeed say that I felt the essence of life and the aloha spirit brush against my soul in a powerful and unforgettable way. 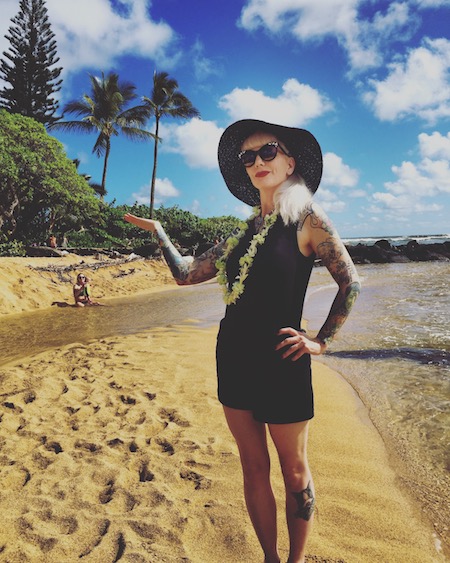 So, it is with a pure heart that I wish Aloha to you and yours!