On the eve of Walpurgisnacht, we were packing for our Romanian adventure, almost following in the exact footsteps of Jonathan Harker, the lead character, in Bram Stoker’s novel Dracula. Pushing warnings aside about leaving through Transylvania that night, Harker continues, embarking on a suspenseful journey to meet Vlad Dracula. Although, we were not shunning aside any cautions, like Harker, a great deal of our journey to Bran Castle did coincide with dates and places that he travelled through in Dracula, something not planned, yet its serendipitous nature tickled my horror loving jugular vein.

Adam and I chose a private tour through the Carpathian Mountains, Transylvania and Walachia. The trip was incredibly affordable, since Romania is not as expensive as most of Western Europe and it is only just re-establishing itself as a popular tourist destination. Our tour included a private driver, entrance to all tourist sites, hotels, a carriage ride through the Carpathian Mountains and a couple of traditional home made meals with families in rural areas (our guide was kind enough to make sure we had vegetarian options available, even though I had planned on a diet of bread and condiments).

This was not your usual Dracula tour, as it was carefully curated to unveil the many histories of the country and its people before we were even introduced locally to Vlad Dracul, or his son Vlad Tepes, all from the perspective of Romanian history. We definitely came out with a much better understanding of the country and the unique position of this country as a crossroads for many different cultures, histories, religions, cuisines and perspectives that have shaped and continue to shape it.

Honestly, there is so much to tell about Romania and there was so much to see, that a whole book could be written, so I’ve tried to narrow it down to a few of the more unusual experiences we had and interesting places we visited that will be published in two parts. 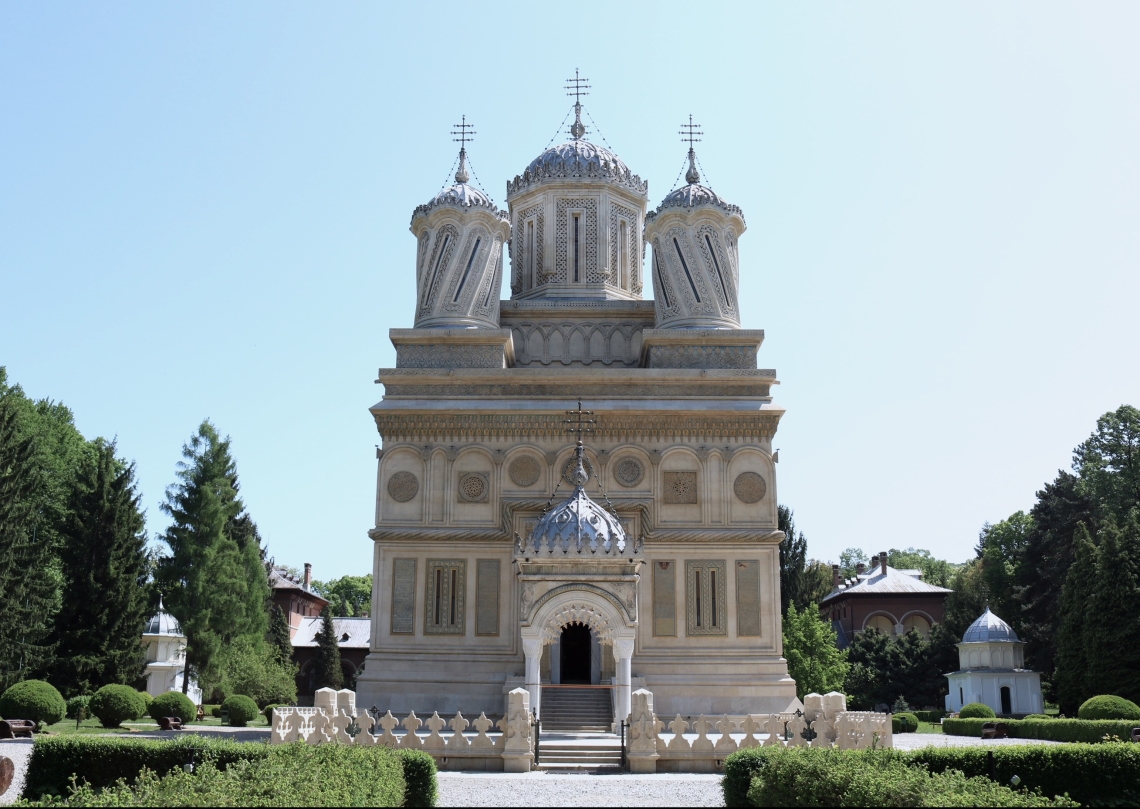 Our first stop outside of Bucharest was Curtea de Argeș Cathedral and it really set the tone for our trip.Our first day in Bucharest had been spent admiring a few of the local orthodox churches that had escaped destruction during the communist era with our tour guide Cristian. They were beautiful, gold embellished temples, with stunning painted walls decorated with mysterious symbols, and ornate altars, but as someone who was not brought up religious, I can respect them as a part of the social fabric of a culture. But the Cathedral in the village of Curtea de Argeș is thought to be one of the most beautiful Orhtodox churches in all of Romania, although it was not its beauty which intrigued me, it was the macabre story about the building of it.

I’m going to give you my guides version, not the Wikipedia version, because it differs and I believe it shows how religion shapes the history we tell.

Radu Negru, a voivode of Wallachia, commissioned Mesterul Manole to build this cathedral in the 1600s. On a side note Radu Negro translates to Radu the Black, because he had a very wicked reputation (as was the going fashion for many voivodes of that era…;)) When the time came time to build the church Manole seemed to be having a string of bad luck and just couldn’t get the walls up. Manole prayed to god and being the honourable man he was god answered him. God told him he would have to give a blood sacrifice in order to build this spectacular church. So Manole went to his workers and relayed the story, they agreed that whoever brought them the sandwiches at lunch (I thought the use of the word sandwiches was cute when the guide told it) would have to be sacrificed. Manole prayed for a storm, since he knew that it would be his wife bringing them lunch that day, but no storm came and his wife was sacrificed and buried, along with unborn child within the church walls.

Well I tried to be silent, but it smelled a bit jesus fishy to me, so I asked “Do you think Monole just wanted his wife dead?”

Our guide was astonished at my question “No! God told him to.” He continued to go on about the sacrifice of Jesus and I was sorry (not sorry) I had asked.

But the story doesn’t end there, it gets even more bizarre! When the spectacular cathedral was almost complete Radu Negru came for a visit. He asked Manole if he would be able to build an even greater Cathedral, and Manole answered yes, likely thinking he was set for life. Unfortunately, when the workers went back to the top of the roof to put on the final additions Radu Negru had the scaffolding taken down so that they were stuck on the top of the cthedral. In an attempt to escape Monole and his Men made wings out of left over wood and tried to fly off of the cathedral. All of the men fell to their deaths, but Manole flew for about an acre, making it to the end of the property before falling. Later a natural spring formed where he landed. You are still welcome to drink from that spring today.

Later, while thinking about this fantastical tale in the car, I asked Cristian.

“Would you tell me about Strigoi?”

He answered….  “So, you want to know about fairy tales?!”

….from this interaction alone I learned so much about Romania.

This amusement park in a salt mine was so uplifting it definitely put my rock salt lamp to shame. Combine the healing properties of salt with an amusement park and you have the perfect jet lag killer and one heck of an amazing place to visit.

The Turda Salt Mine is outside of Cluj, a very metropolitan and vibrant city worth exploring in its’ own right. The mine had been in use from the middle ages to the 1930s. In 1992, the mine was reinvented and an amusement park was added 800 ft below the earth. The park features a ferris wheel, bowling alley, rowboats, and even mini golf.

I was immediately struck by the strange, extra-terrestrial beauty of the cave walls and natural salt formations. The white glow of the amusement rides only added to the sci-fi appeal of the place and the beautiful salt air made us feel slightly exuberant , as if we could float through the great halls and underground chambers of the mine. 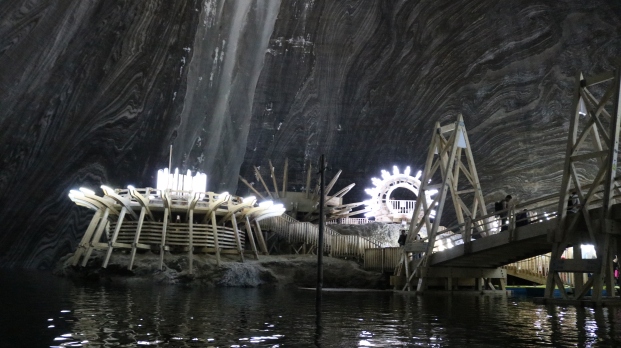 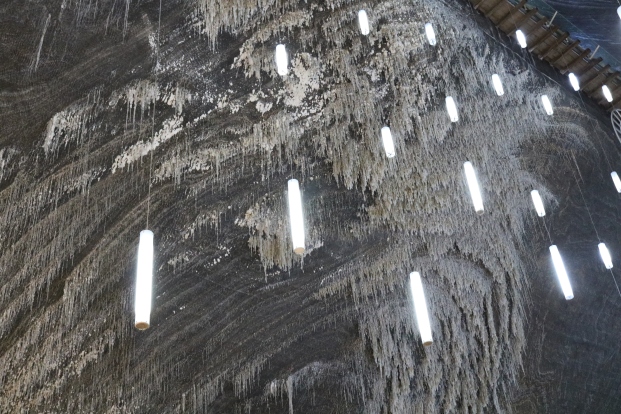 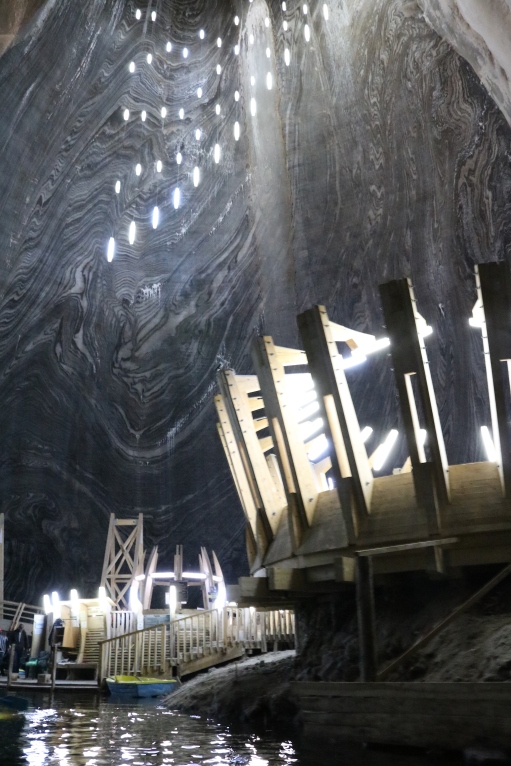 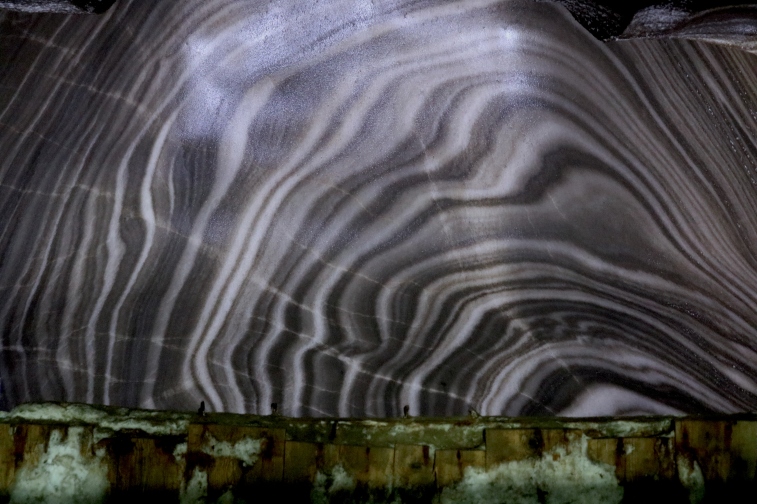 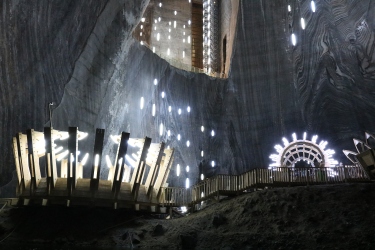 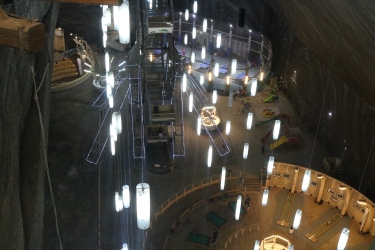 We spent most of our time on a lower level, rowing a boat through a cavern of salt water, we giggled as every word we said echoed and returned to us minutes later. Of course I had to howl, alerting our tour guide that there just may be a salt strigoi present, or three or four, four, four, four….. The whole otherworldly experience had me feeling as though I was on a venetian gondola ride through outer space and it was a truly unforgettable experience.

The Merry Cemetery is in the village of Săpânţa, Maramureş This is definitely one of the most interesting places I have ever visited. Maramures is part of the world that has completely preserved its traditional culture. Walking down the winding roads of the village even children and teenagers donned the traditional dress, with headscarves and embroidered garbs. Villagers sell herbal remedies and fine cotton doilies on the edge of the street and the sound of fiddles sing loudly from local restaurants. I instantly felt as though I had been transported into a place far in the distant past. Right in the centre of Săpânța is the parish church which is home to around 800 brightly painted folk styled orthodox headstones. Here lies the Merry Cemetery.

Each monument is intricately carved and made of wood, as it is said wood represents eternity and perenniality in Romania. The markers are the work of Folk Sculptor, poet and painter Ion Stan Petras and later his assistant Dumitru Pop. This cemetery is so notorious as a type of folk art museum that the blue painted on each grave monument is known as “Sapanta” blue. Each grave cross acts as a shrine to the life of the person it represents and includes visual representations of how the person lived (or died in some cases), as well as poems, that relay the essence of their lives. Some complimenting, others scolding how the departed one chose to live.

Unfortunately, many of the poems are written in a local dialect, so unless you know a local many are unable to be translated. However, there is a guide book available in a gift shop in the cemetery with translations for a few of the graves. 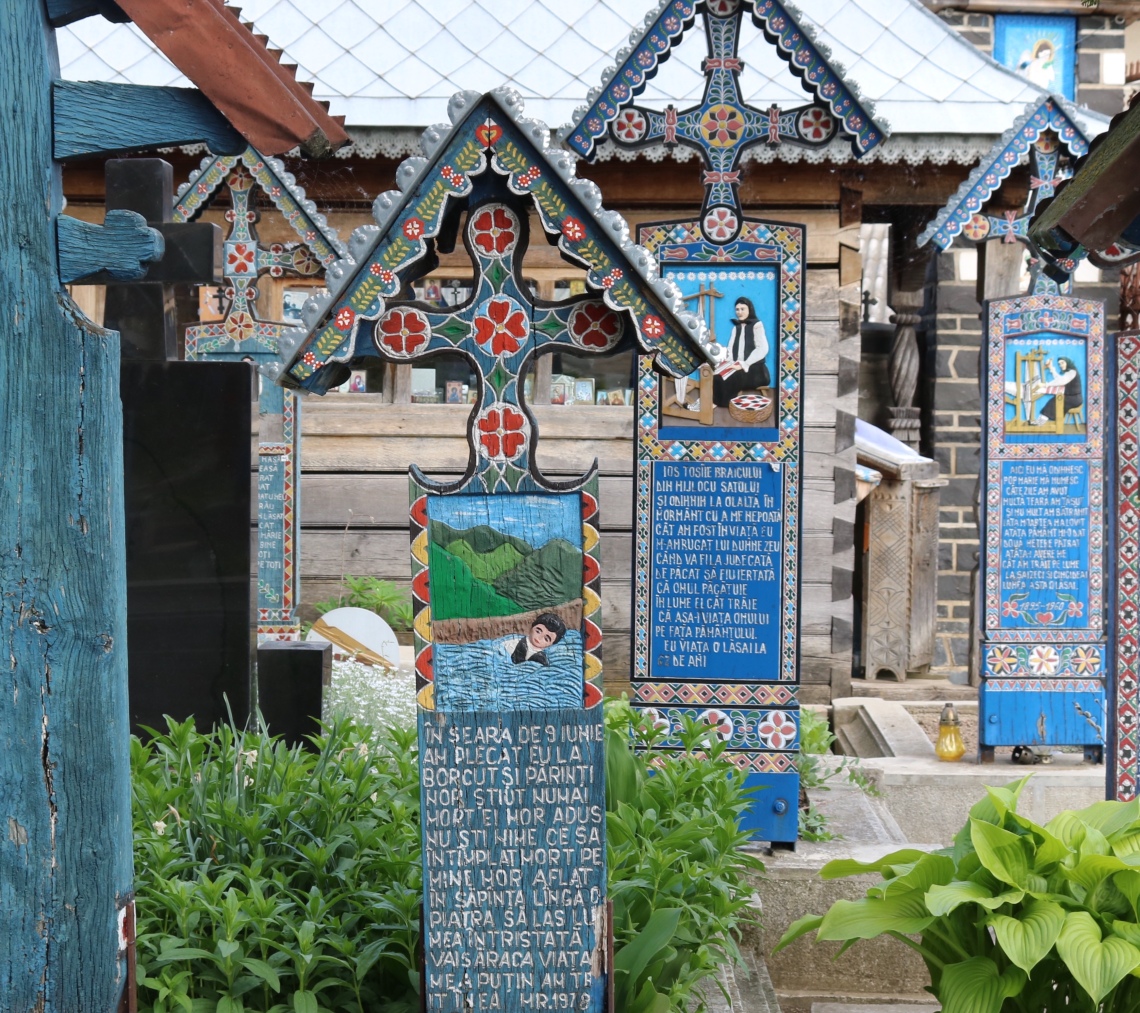 Here is one poem for the above grave depicting a young child drowning in a river.

“In a balmy day of June
I left town right after noon
My parents were unaware
For my death could not prepare.
Dead they found me near a stone
I had left them all alone
Oh, my life indeed was brief
And it was so full of grief.”

I know, not quite merry, right? But the Merry Cemetery is an attempt to look at death in a different way. Rather than the usual somber approach. The cheerfully coloured crosses point to life, albeit sometimes the last moments of life,  and bring attention to that person’s unique experience in the world. It is a reminder that these people lived, felt joy, pain, sorrow, anguish, as well as happiness, compassion and companionship. There is not a somber feeling to be felt here, just a joy of life that the cemetery conjures. 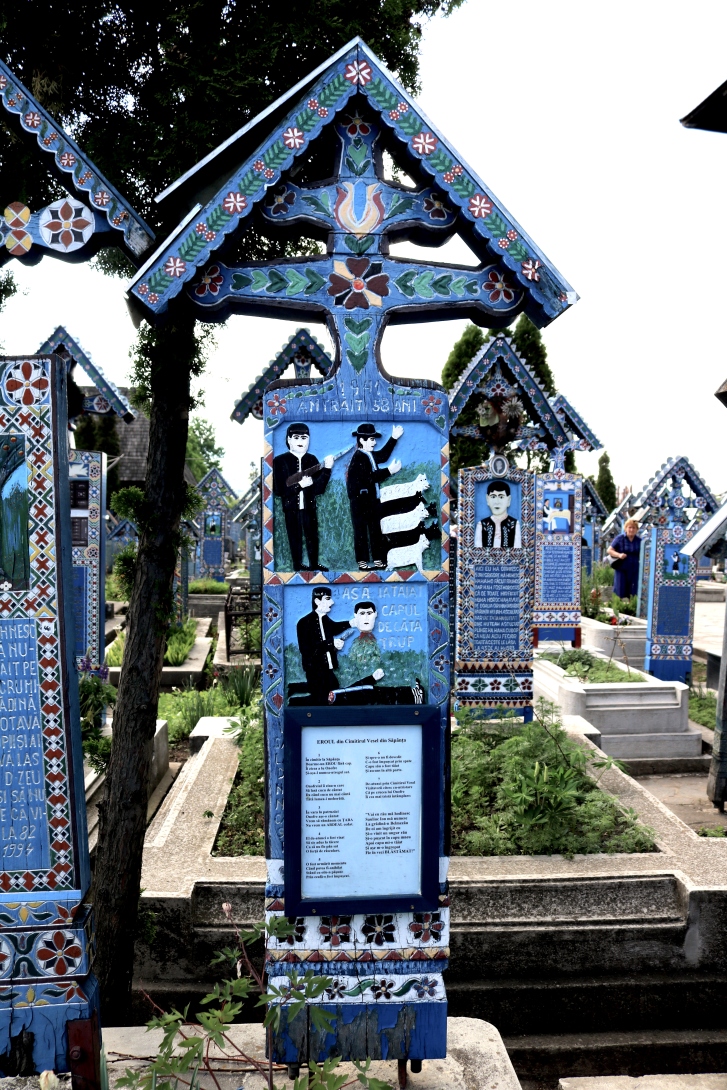 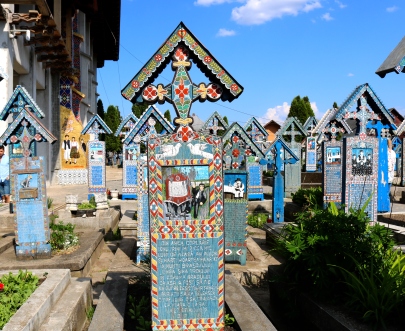 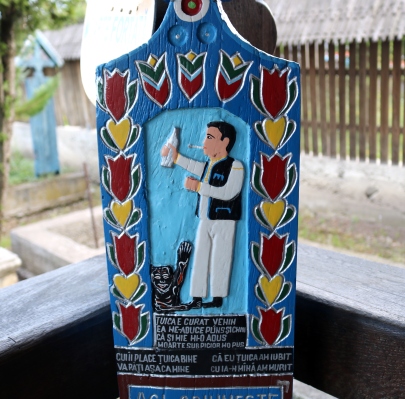 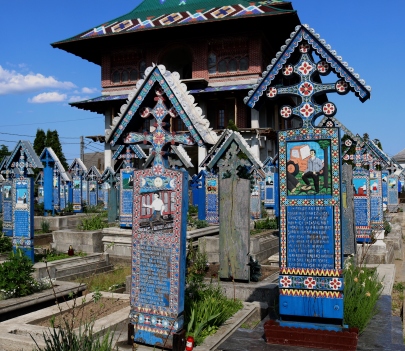 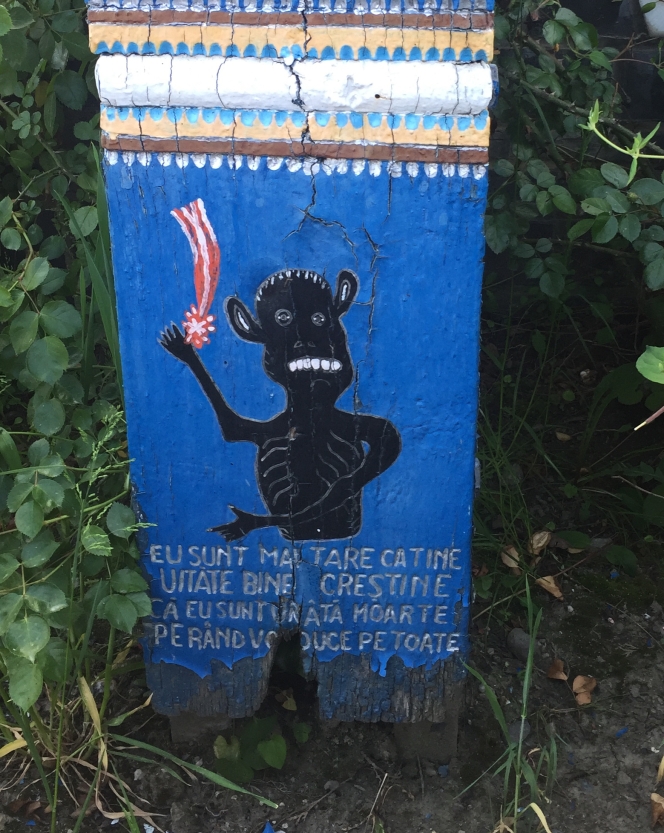 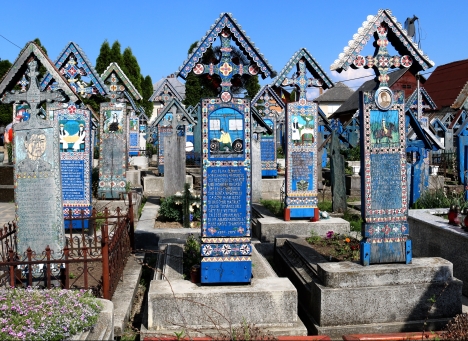 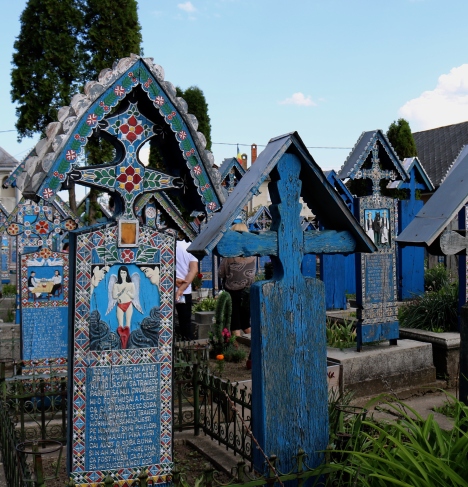 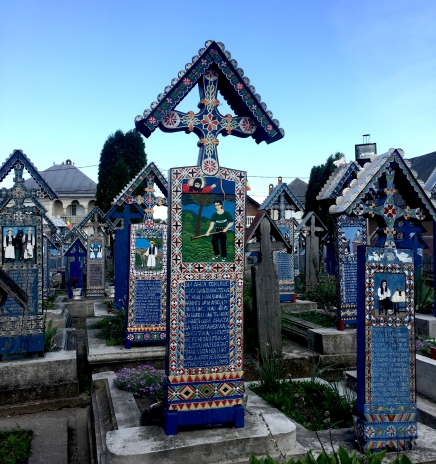 The Merry Cemetery guidebook states: “The Romanian peasant has never been afraid of death. For him the cross is a gateway to the eternal rest. Thus, death becomes a natural event, accepted as something given by fate.” To me this unique viewpoint and embracement of death as part of life was very uplifting and helped to validate my own feelings on death in a more pagan sense of death as being part of nature.  I hope to wander here again someday, while still part of the waking world.